I hope this letter finds you well. It’s a Tuesday and I’m writing this in a coffee shop while a haze is outside. There’s a forest fire up in the northern territories of Alaska that has brought smoke down to my hometown of Homer.

I am writing this first of many letters to share my goals, direction, and strategies for Disrupt inc. To start, I’d like to share our team’s North Star. “North Star” being defined as the guiding principal behind what we’re doing here. This can be summed up in;  striving to create the highest quality content on the internet.

That raises the question, how do we define what quality content is or isn’t?

I believe there are two categories that go into answering this question:

That is to say, audio that’s clear, visuals that are compelling, and storytelling that brings the viewer to another world.

It’s been said before that this triangle represents content production: 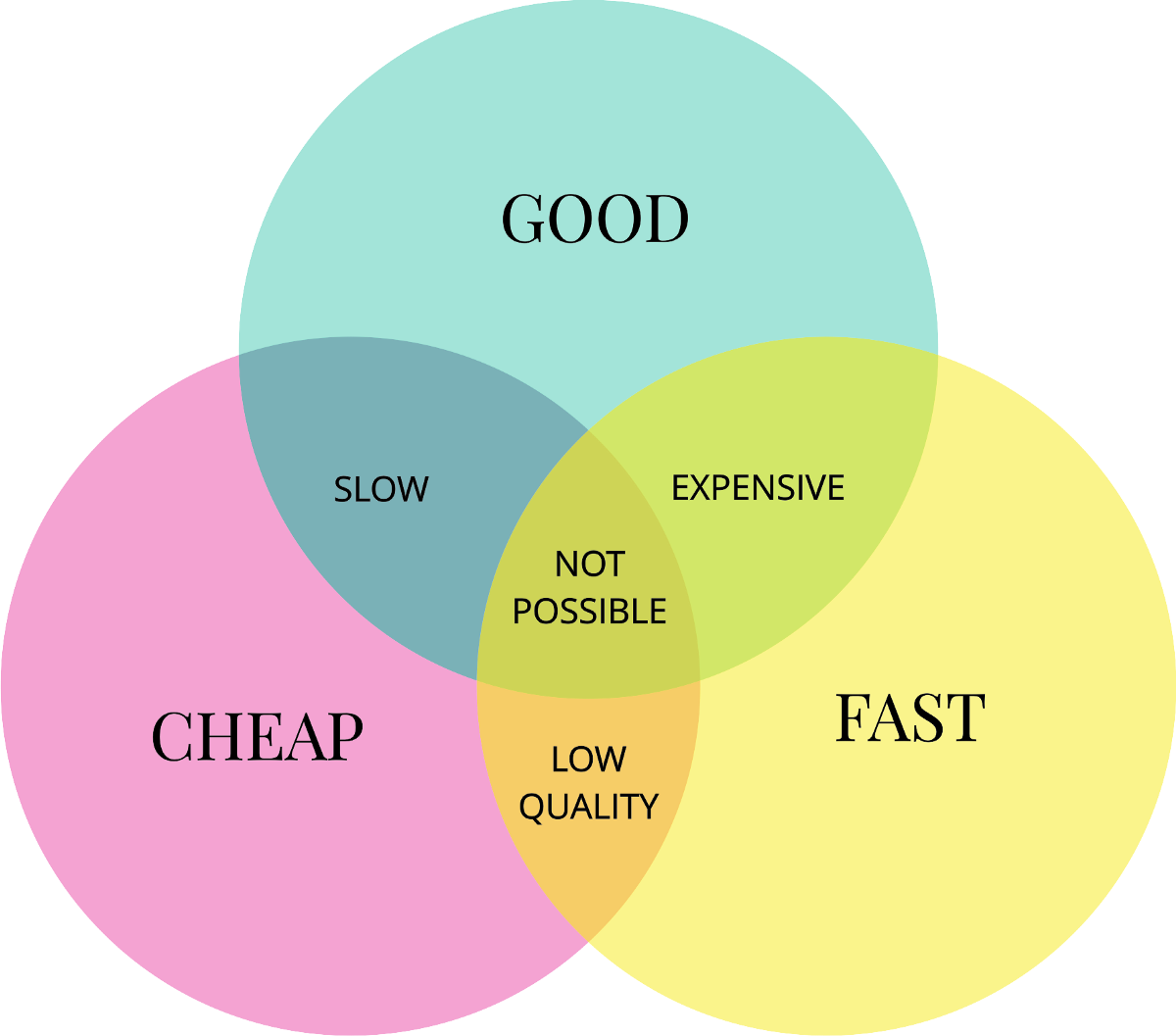 With technology specifically related to production becoming increasingly democratized, I believe this graph is becoming less relevant by the year. That is to say, I am striving for cost-efficient, fast and quality by utilizing the technology that just a few years ago would have cost an arm and a leg. Tools such as AI image generation, real-time animation, and neural network motion capture are quickly blurring the lines between those three categories. But the tools are only tools, they need a talented group of individuals behind them to craft content. That is to say, writers, editors, and animators that can work within a pre-existing stylistic framework aswell as bring their unique creative vision to a given project.

When it comes to finding high-standard talent, I’ve taken a page from Jeff Bezo’s playbook here:

With this in mind, my approach to finding and retaining high standards on the Disrupt production team has been to remain vigilant in observing what each individual is contributing not solely based on their output, but rather, the amount of effort said individual puts into continually improving their skillset. On the adverse side, I strive to hold myself to the same standard by scrutinizing my previous work & learning from my colleagues.

This mindset has, so far, nurtured an environment at Disrupt where we’re beginning to see a high quality output on a timely manner with a conservative budget per video. With that being said, we are far from optimal output and we will always have room to improve.

What makes a story good?

I am using the word good here in the context of good & evil. I believe a good story has a clear line drawn between these two opposing forces; heroes overcoming villains, lies exposed, and archetypal characters.

These types of stories are easier to tell in a fictional context since we, as the creators, are fully crafting the events of a story. This is more difficult in a non-fiction context.
I see curating which types of stories we tell (and don’t tell) as being one of the most important aspects of my job.  I strive everyday, to view this world on the assumption that once my life ends, I will have to pass judgment for everything I’ve had within my power to release through Disrupt. Are we releasing content that glorifies darkness? Or light? God? Or the devils?  In other words, I view this short life through a Christian lense. With that being said, not every story Disrupt tells will be a Bible story. But every story we tell will strive to uplift the individual soul who watches our content. Even if we’re just making a video about a deadly computer virus :).

“The allotted function of art is not, as is often assumed, to put across ideas, to propagate thoughts, to serve as an example. The aim of art is to prepare a person for death, to plough and harrow his soul,

rendering it capable of turning to good.”

July was a month spent primarily in finalizing our campaign. Alot of backend work has culminated in a campaign that I truly feel we’ve put 110% into making successful. I’m reminded of an allegory given by a Texan speaker with a deep southern accent with whom I resonate with. His name is Zig Ziglar, and I’m summarizing here:

—
“After releasing the bowling ball many people carefully watch the bowl as it travels down the lane. They use their arms and their voices to guide the ball, “Left, go left!”

Now it doesn’t make one bit of difference whether or not you talk to the bowling ball; it will wind up in the same place. Worrying and stressing about the result has no impact. It only matter how much you practiced bowling before you shot our shot.

We gave it our all, now we’ll see if our raise is a success.

Last month we saw a new pilot release on Disrupt+ by one of Disrupt’s previous video editors turned show-runner, Jonathan Miller. Should our raise be successful, we’ll be expanding his pilot into more content.

August will be focused on the following: